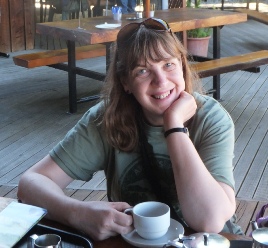 Anna Le Hair’s debut concert at the Riverside Arts Centre was a notable success and gave great pleasure to a large audience. It was a singularly well-chosen programme consisting mainly of Romantic pieces with a substantial work by Beethoven in the first half. Anna proved herself to be a highly sensitive and poetic player, playing with power when the music demanded it, but never forcing the tone…...more

The setting of Brahms "Ein deutsches Requiem", with four hands, rather   than  full orchestra, allowed the choir's tone, clarity and diction to shine  through over the sparkle and control of Timothy Nail and Anna Le Hair on the  piano.  Sussex Choral Society concert review, November 2013

‘.....just wanted to say how very much I enjoyed your performance of the Bridge  - utterly outstanding!’ …. ‘Thank you for your wonderful playing of this very complex piece. I didn't know it, but found it gripping from start to finish! What an amazing structure, and very beautiful colours’. Audience reactions to a performance of the Bridge violin sonata with David Gaster in February 2017.

‘To this concert, Anna Le Hair brought technical skill of the highest order and also the artistry of one who lives for her music’ Review on the St Mary’s, Hemel Hempstead website

‘It was a delight to welcome back Anna Le Hair to our lunchtime concert series. She is a

virtuoso with a consummate mastery of the keyboard but we have come, arguably, to take her

technical brilliance for granted. What we can never take for granted, however, is her artistry…...more

‘……. On the occasion of my most recent visit [to Trunch church, Norfolk] a pianist called Anna Le Hair was practising for that night's concert of Russian piano music. Heard of her? I hadn't. She was jolly good. She apologised for disturbing me, and said she was nearly finished, but in the event after 20 minutes I left her to it - it had been a pleasure to wander around listening to her beautiful playing, but the piano was in front of the rood screen so I couldn't very well kneel under it to take photos. I shall go back.’ Simon K on flikr, spring 2013

‘... Arwen Newband accompanied by Anna Le Hair performed Z domoviny (From my homeland) for violin and piano, bringing out well the special atmosphere of its Czech folk melodies, that seem able to be both happy and sad, and the contrasting material’s stirring dance rhythms….. .more

Thank you all for a joyful, toe-tapping, “hands-on-knees beating time” concert!!  It was a delight!  Please come again!  Everyone was smiling - what a pleasant change!  From an audience member after an eight hands concert in March 2010  at St John’s church, Boxmoor with Nicholas King, Rita  Fryer and Stephen Meakins.